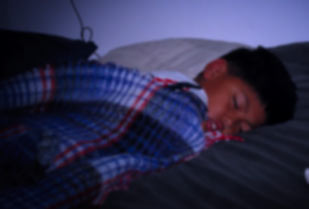 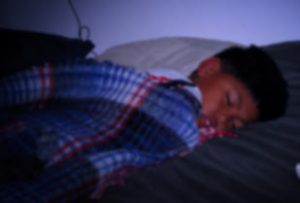 The other night ’bout two o’clock, or maybe it was three,
An elephant with shining tusks came chasing after me.
His trunk was wavin’ in the air an’ spoutin’ jets of steam
An’ he was out to eat me up, but still I didn’t scream
Or let him see that I was scared – a better thought I had,
I just escaped from where I was and crawled in bed with dad.

One time there was a giant who was horrible to see,
He had three heads and twenty arms, an’ he came after me
And red hot fire came from his mouths and every hand was red
And he declared he’d grind my bones and make them into bread.
But I was just too smart for him, I fooled him might bad,
Before his hands could collar me I crawled in bed with dad.

I ain’t scared of nothin that comes pesterin’ me at night.
Once I was chased by forty ghosts all shimmery an’ white.
An’ I just raced ’em round the room an’ let ’em think maybe
I’d have to stop an’ rest awhile, when they could capture me.
Then when they leapt onto my bed, Oh Gee! But they were mad
To find that I had slipped away an’ crawled in bed with dad.

No giants, ghosts or elephants have dared to come in there
‘Coz if they did he’d beat ’em up and chase ’em to their lair.
They just hang ’round the children’s rooms
an’ snap an’ snarl an’ bite
An’ laugh if they can make ’em yell
for help with all their might.
But I don’t ever yell out loud. I’m not that sort of lad,
I slip from out the covers and I crawl in bed with dad.