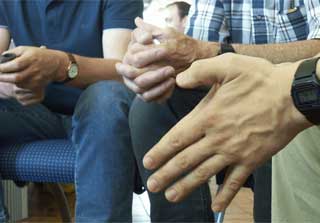 Mental illness is a pretty lonely place to be.  The demons that reside and runs wild within the sufferer’s mind gives no rest especially for those afflicted with more serious forms of mental illness, e.g., panic disorder, schizophrenia, bipolar disorder, major depressive disorder, etc.

First things first:  what is mental illness?  “Mental illness” or being “mentally ill” is an unfortunate labeling of an otherwise containable affliction.  The mere mention of “mental illness” brings to mind horror films of people in hospitals purposelessly drifting, caught in their own dream-state realities and unconscious of their surroundings.  Some muttering incomprehensible words, others shackled, while others laying naked on cement floors.  As a result of this Hollywood-induced imagery, a stigma against mental illness has developed and continue to pervade social consciousness.

Today we know that a small part of what we call mental illness are considered “serious mental illness” — approximately 6% to 8% of the population — and treatment for these types of mental illness is not as horrific as those portrayed in movies.  Because of the number and effectiveness of today’s antipsychotic medication, many of those suffering from serious mental illness are able to go back to the community and hold meaningful roles, e.g., job, school, marriage.  The majority of what falls under the category of “mental illness,” however, suffer from difficulties in everyday living or with interpersonal relationships.  Of these, the different forms of depression, parent-child conflict, difficulty controlling anger, conflict in interspousal relationships, anxiety, some forms of posttraumatic stress disorder come to mind.

Depending upon the presenting problem and number of family members involved, psychotherapy may take the form of individual sessions, family counseling, or group therapy.

The negative perception about mental illness is unfounded.  The majority of even the most serious mental illness can be controlled through medication and the sufferer able to go back to the community to lead productive lives. The majority of people who suffer from mental illness suffer as a result of difficulties in everyday living or interpersonal relationship.  In both of these cases, psychotherapy can help alleviate the sufferer’s pain and mental anguish.  However, the first step is to consult with a psychotherapist near you.