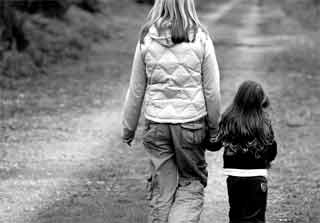 Child(ren) with maladaptive behavior and/or psychiatric diagnosis living at home affect a family’s stress level and emotional well being.

Theories abound, and numerous studies have shown, that a family’s socioeconomic status, coping mechanism, means of communication, and overall emotional stability exert influence on a child’s behavior and future coping skills. Being born into and growing up in a socioeconomically disadvantaged family (low educational level, single parent homes, demographics) and having at least one parent with maladaptive behavior problem are good predictors that the child(ren) would exhibit maladaptive behavior (Schultz & Shaw, 2003) which may contribute to suicidal ideation (Kashani, 1998) during adolescence, if not earlier.

A number of factors determine the level of stress parent(s) experience:

First, parenting style contributes to the well being of the family. As the family tries to cope with a child’s maladaptive behavior or psychiatric disability, parenting style can contribute to or lessen the family’s stress level. Stress level is much higher for parents who react emotionally as opposed to parents who are problem-focused (Hassall, Rose, 2005). Additionally, cognition and overall sell-esteem plays a great role in how the family deals with the problems associated with the child. The more positive the cognition and the higher the self-esteem, the lower the stress level (Hassall, Rose, 2005; Maes, Broekman, 2003).

Second, cultural background and, most especially, perception of parents’ role in child-rearing has been shown to lessen the stress in mothers of children with maladaptive behavior. Blacher &McIntyre (2006) studied Latina mothers and Anglo mothers. While their study found that Latina mothers suffer more from depression and lower morale than did their Anglo counterpart, their research revealed that overall stress level between the two groups did not differ. Blacher & McIntyre (2006) attributed the lack of difference in overall stress level to the Latina group’s overall perception that child-rearing is a responsibility that involves self-sacrifice.

Third, social support system either through friends or family can provide respite from the tedium and stresses brought on by raising a child with disability (Hassall, Rose, 2005; Blacher & McIntyre, 2006; Maes, Broekman, 2003).

There are many ways that parents can deal with the stresses of living in a home with a child with psychological disability and/or exhibit maladaptive behavior. Proper handling, raising and caring for such children is essential to ensure that the problem is minimized, not exacerbated. However, the betterment of the child should not be at the expense and detriment of the caregiver. It is, therefore, imperative that parents learn to deal with their child(ren) in constructive and positive manner while building the parents’ self-esteem, cognition and social support system. This support, if not available through friends and/or the extended family, are available through numerous social services (there seem to be a group for just about anything — meetup.com is one source).

Studman, L., Roberts, C., Hay, D., & Kane, R. (2003, August). Development and evaluation of a program designed to facilitate family adaptation in families with a child who has a disability. Australian Journal of Psychology, 55, 214-215.